Kortrijk Airport has developed an online safety briefing, in order to inform pilots of:

* The particularities of Kortrijk Airport and the surrounding airspace

* The changes since the introduction of the IFR PBN procedures, both on RWY24 and RWY06.

Important: The personal flight preparation of any pilot intending to operate to/from Kortrijk Airport shall however go beyond the information contained in this safety briefing, and shall be based on actual and updated official documents contained in the AIP, AIP SUPs and NOTAM’s.

The airspace of EBKT airport is class G.

This means that no air traffic control (=no ATC) is provided at EBKT, only traffic information is available.

The callsign is “Kortrijk Information”. 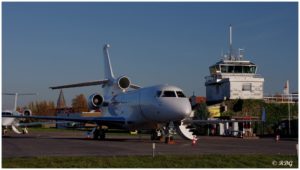 When entering and flying in this zone:

For TCAS equipped aircraft, the use of the TCAS in Auto or TA/RA mode is also compulsory.

Remark: Please note that the RMZ/TMZ is partly penetrated by the Paradrop Area of Moorsele Airfield (EBMO). Paradrop activity regularly takes place at EBMO. In this case, Kortrijk Information will inform pilots that Moorsele is “active”.

At EBKT airport, both VFR and IFR operations are allowed.

All pilots should be aware of the potential conflicts due to converging tracks between VFR and IFR aircraft. Especially when proceeding in the airspace to the north of Kortrijk airport, where IFR procedures are crossing the VFR routes (W1-W2, N1-N2) towards the airport.

In order to improve the situational awareness of all involved, combined IFR & VFR procedure charts have been created.
These allow both VFR and IFR pilots to have an understanding of the position of other traffic when they report it.
Please take a moment to locate the VFR reporting points (N1, N2, E1, E2, S1, S2, W1, W2), the IFR reporting points for RWY 24 (MAK, MIRZO, ALFAS) and RWY 06 (MAK, GIGAD, IKIFE, MINLU) on these charts. 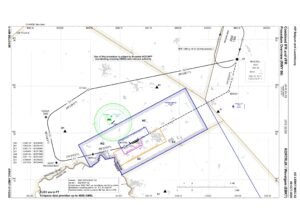 Kortrijk Information will provide as much traffic information as possible.

But pilots have to keep in mind that they fly in class G airspace where ultimate responsibility for separation remains with the pilot.

BEFORE taxi, it is mandatory to contact “Kortrijk Information” on 120.250 (and request taxi information).

It is also mandatory to contact “Kortrijk Information” at the holding points:

These taxi regulations have been put in place to improve situational awareness on the ground and to avoid runway incursions. 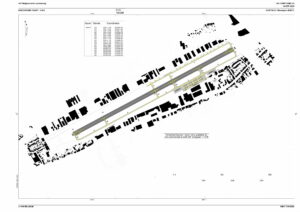 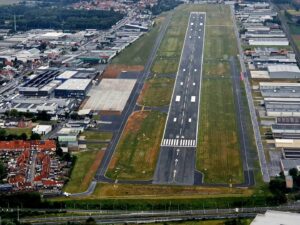 An IFR PBN procedure is available for RWY 24 and RWY06. Currently, conventional IFR is not available at EBKT. 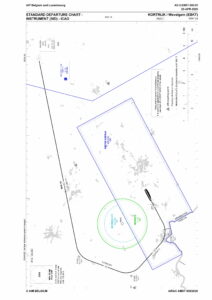 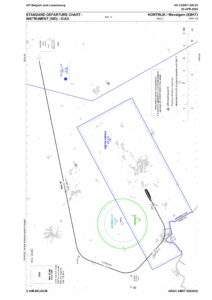 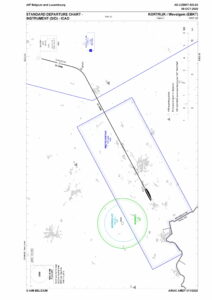 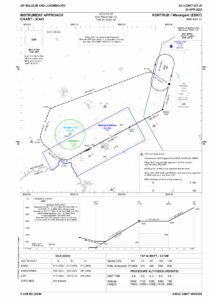 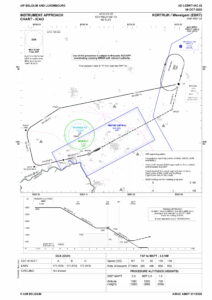 Please note, that when approaching or departing EBKT via reporting points N1 and N2, or W1 and W2, you will cross the IFR procedure ground tracks.

There are 3 separate VFR traffic circuits:.

HOW TO JOIN THE VFR TRAFFIC CIRCUIT?

VFR flights are recommended not to fly overhead the signalling area if not required.

After overflying the mandatory reporting point and if possible also the recommended reporting point, VFR pilots should join beginning of downwind of their applicable circuit.

If necessary, extend downwind slightly or leave the traffic circuit and re-join beginning of downwind in order to avoid conflicts with other traffic. 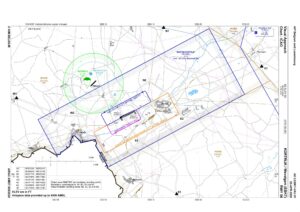 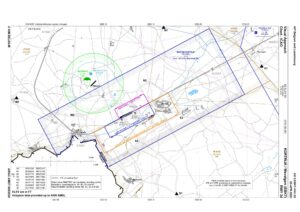 This means that for normal operations at EBKT, the wingspan of an aircraft should be less than 24m.

However EBKT can accomodate – from time to time- aircraft with an aerodrome reference code higher than 2B (wingspan >= 24m).

A 24H notice is required to obtain the PPR.

What does the “Higher code aircraft procedure” exactly contain?

The “Higher Code Aircraft” procedure is activated by NOTAM and announced at least 24H before.

When this procedure is activated, Kortrijk AFISO has the authority to restrict all other movements both on the ground as well as in the RMZ/TMZ as long as the Higher code aircraft is on the approach, departure or taxiing on the ground. 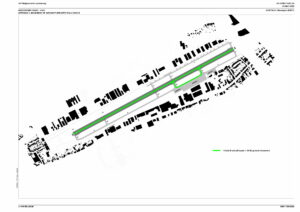 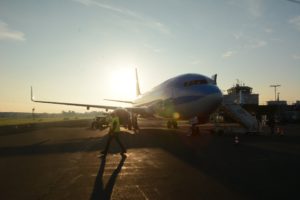